Creating a Permaculture Food Forest is Not Always the Answer

Many folks in the permaculture world promote food forests. What is a food forest? A food forest is a multi-layered, purposefully designed forest comprised of food producing species. Think of it like a very low maintenance “garden” that has a lot of trees, shrubs and ground species that produce something useful like fruits, nuts, seeds and herbs. Don’t get me wrong, I LOVE this idea. I will create a food forest when I own some land. However, many people are trying to create food forests everywhere and see this technique as the “end all be all” solutions to our food problems. I’m of a different opinion.

I’m being the devil’s advocate for a reason. I want to present some new ideas and start some conversation. 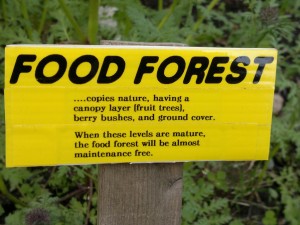 How will a food forest produce protein and fat for me? These are two basic nutrients that every human needs in their diet. When I say protein, I’m talking about animal protein. This is not a place for a debate on not eating meat vs eating meat, eat whatever you want. However, most people in the United States eat meat. One way to raise animal protein in a food forest would be to graze animals within that system. Pigs seem like a natural fit. But, you’d need a big food forest to produce enough pork to feed even just your family. What about making a profit by selling to other families or becoming a pork producer? Can a food forest give you that? I don’t know, maybe. Sepp Holzer in Austria has great success with it, but lives in a different environment than I do.

I live on the plains of Colorado. Colorado is an semi-arid/high desert climate. Creating a large scale food forest would be challenging but possible. However, that is land that could be used to graze livestock. The great plains have historically been, well, plains or grasslands. Is putting a massive amount of energy into converting this area into a food forest worthwhile? On a small scale, I think so. On a commercial scale, I don’t think so. Would changing these grasslands into something “unnatural” help or hinder?

Properly managed grasslands can produce a massive amount of high quality and environmentally friendly animal proteins and fats. The fertile soils of the great plains were created by large herds of herbivores who numbered in the millions and moved quickly and frequently to new areas of fresh grass. Ranchers are using this technique on millions of acres around the globe.

I’m of the opinion that we need to manage and make decisions based upon the environment we are in. If I were to plant a coconut tree in my backyard, people would call me crazy. Rightfully so. Let’s work within the climate in which we live. If that climate historically lends itself to grazing livestock, why change that? Nature has already decided for us what the best use of that land is. Lets capitalize on it.

You can also subscribe to Agricultural Insights and get notified of new posts via email by going here.