The following written by Tate Smith. He was kind enough to write in a description of how the fence braces that Greg Schwab talked about are made and he also included some awesome pictures. Thank you Tate!

The upright brace is 2″ (Greg correct me if I’m wrong on these measurements) the legs are 1 1/2″ angle iron. We sink the upright til about 3 1/2′ are left above the ground. The upright is driven about 3-4% off of vertical in each direction opposite of pull, as shown in these pictures.

The wire that tightens the leg is a very important part of this design. First start by lining up the leg with the direction of the fence and put the end of the leg in the middle of the stone. It is best to drill the hole for the wire as close to the ground on the upright as possible. Measure the distance from the hole to the bolt that holds the leg onto the upright. Take that measurement back down the leg and drill the second hole. The hole on the leg should be as close to the point where the to widths of the angle iron meet (imagine an L and put it close to the corner of the L and on the side that faces the sky). These holes are a 1/4″ in diameter. We use high tensile wire, I forget the gauge, but I think it’s 14 gauge. String that through the two holes three times. So that you are spinning a total of six wires. Tie a knot with the loose ends, keeping it pretty. This not does not have to be very tight, it will be tightened later. Put the knot a little of of center of the wire. Take your spinning device (I use the handle of my pliers, but a flat head screwdriver works too). Spin the 6 wires in the middle. 3 on each side. Spin the wire until the leg gets a bow in it. The more of a bow the better, but don’t break the wire. It is really important when stringing the wire to keep it as tight as possible when stringing. Finish up by tightening the knot that you tied with the loose ends.

If the brace is being built in softer soil, or soil that will become very wet during parts of the year, like the brace in the pictures at the bottom of a irrigated hay meadow, it is very important to set a dead man. This is done by first drilling a 1/4″ hole in the top of a T-post, about 3 inches from the top. Drive this T-Post until the hole that you drilled is about 1/2″ to 1″ off of the top of the ground. String wire through the hole in the T-Post and around the top of the two legs where they meet the upright. Three wraps and spin just like before. Pliers aren’t very good for this spinning, a flat head screwdriver works best. There is no visual indication for when you have spun enough on this. Just get it tight and don’t break any wires.

It is pretty important to get the stone as level as possible. This put’s all of the force that is being brought through the leg evenly onto the ground. So now that the brace is built and the wires are strung, the majority of stress from the wire’s pull is being pushed downward onto the stone into the earth. Some pull, mainly from the top two wires is pulling on the upright (which can cause upheaval in the upright in soft soils).  By tightening the leg into a bow, it tightens the upright and relieves the force from the bottom three wires and puts it into the stone.

I’m not an engineer or anything, but this is my observation of how the brace physically works. I’ve built quite a few, and Greg has built hundreds, and none of them fail. The biggest thing with this brace is building it correctly, and knowing the soil to know when a dead man is needed. In rocky dry soils, these braces are bomb proof. With a dead man in soft soil, it will out perform a wooden H-brace 100 percent of the time. 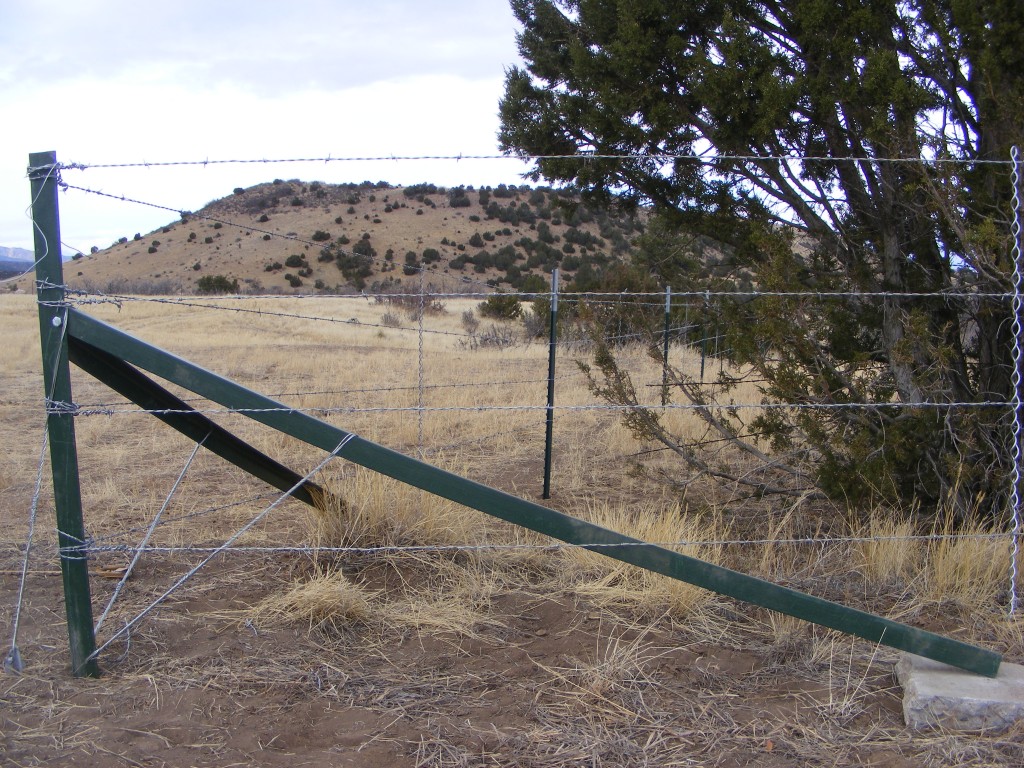 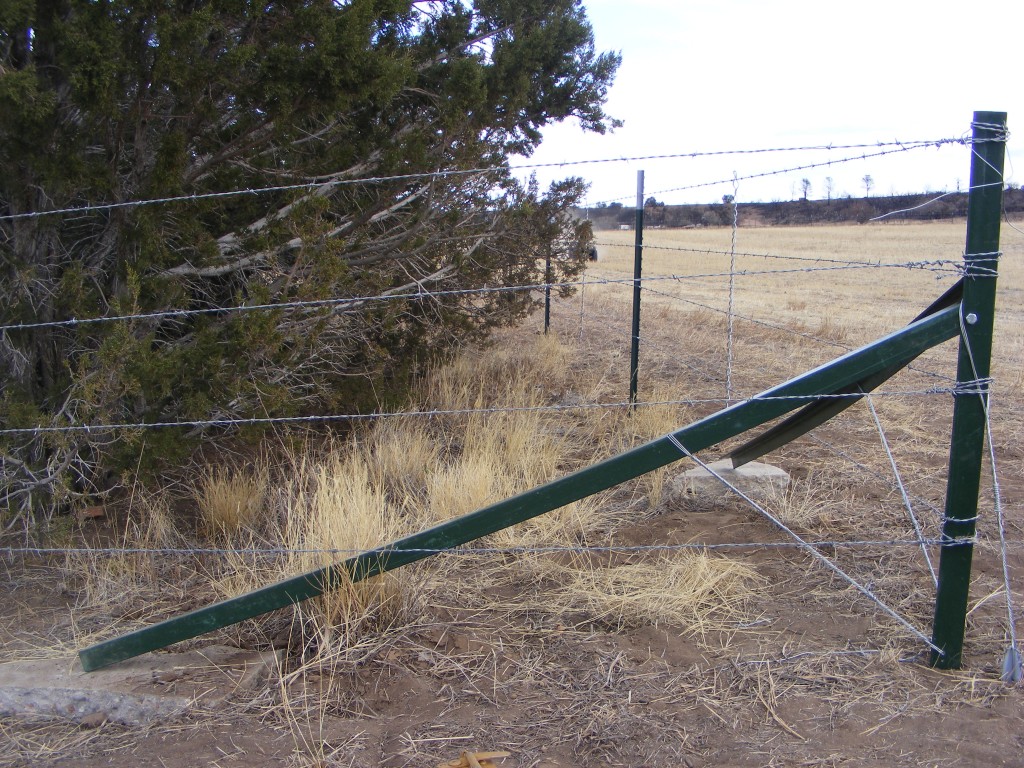 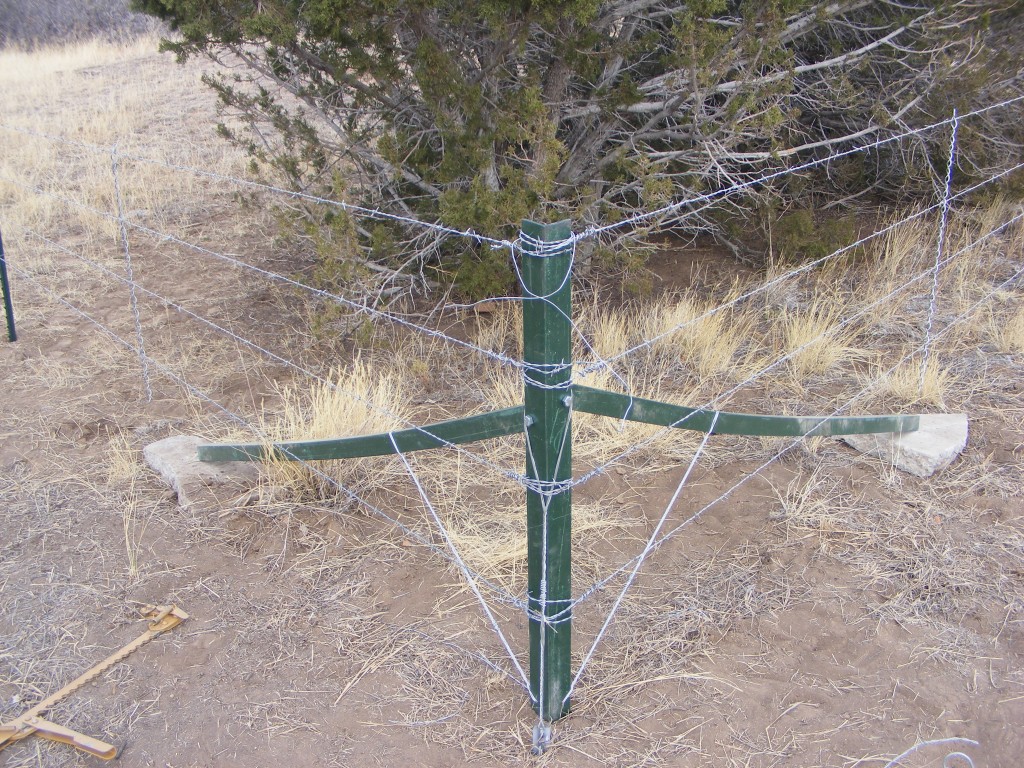 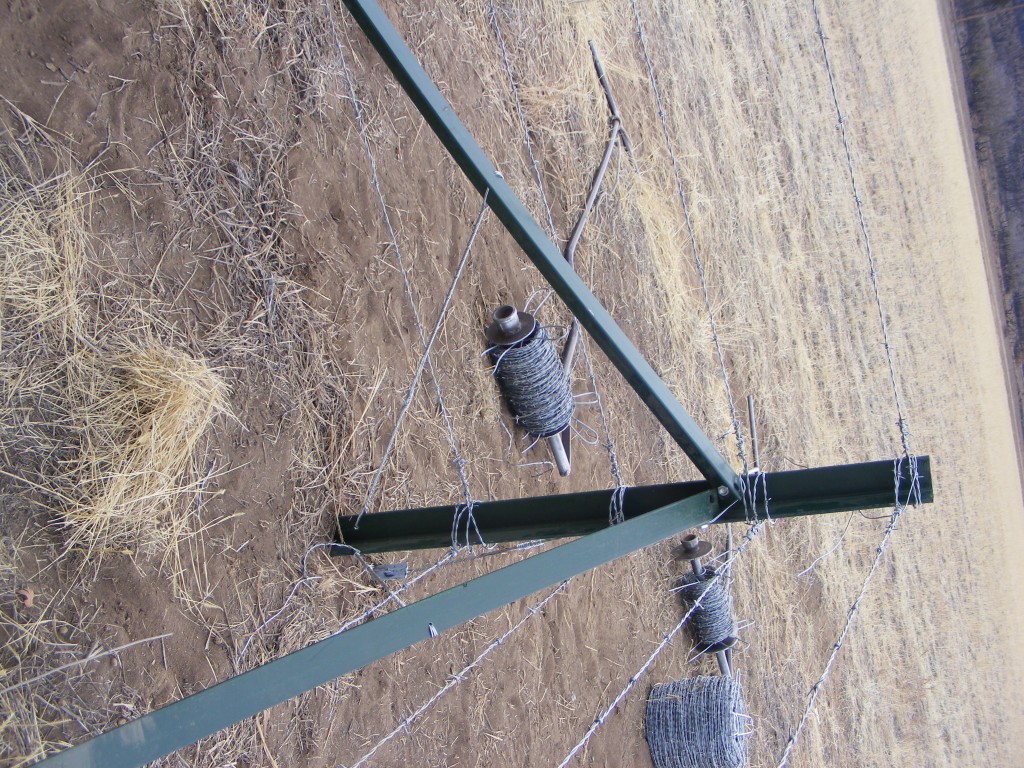